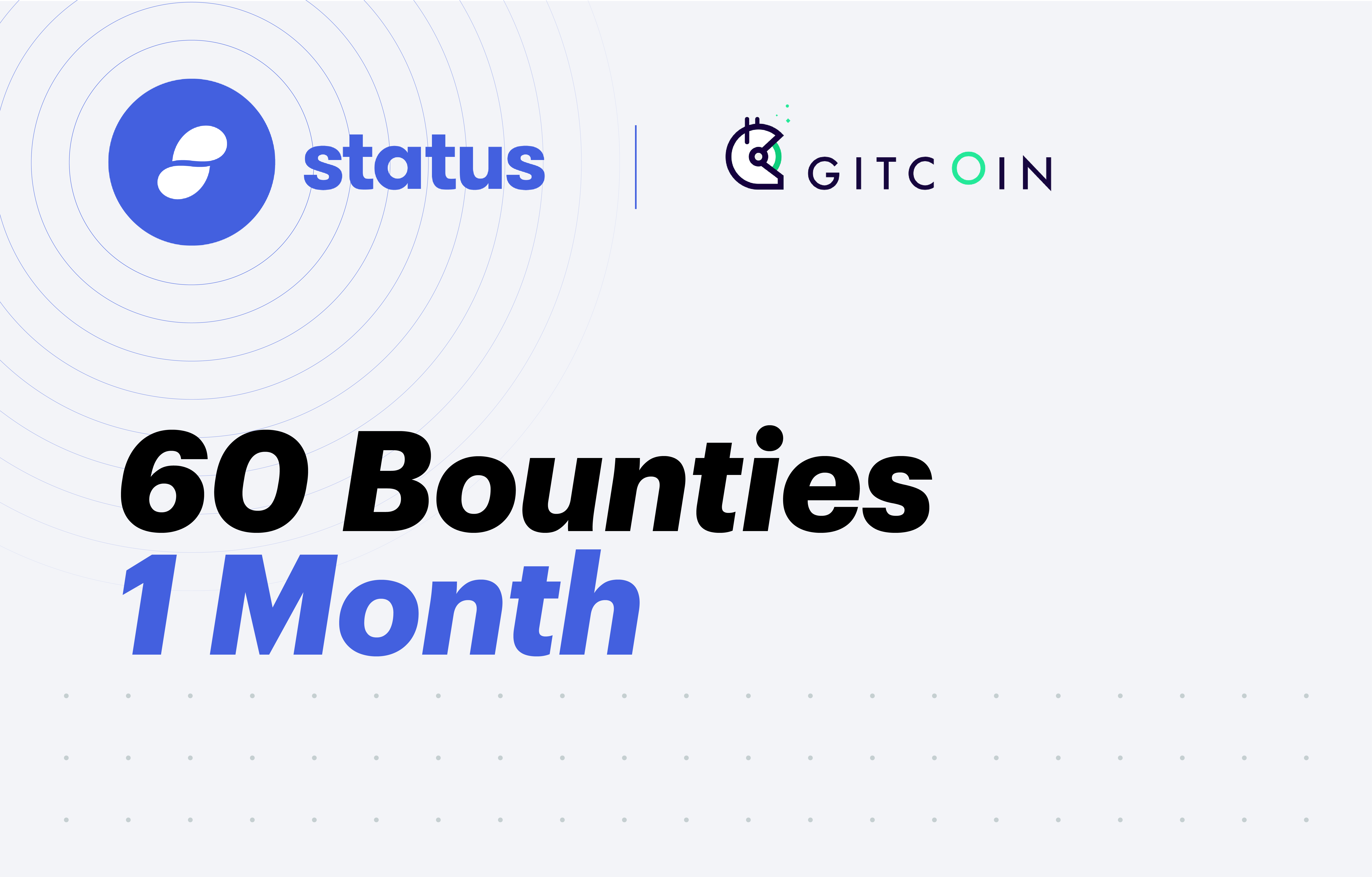 Status Open Bounty was the first bounties project on Ethereum and, within weeks of launching it, we could see the potential in bounties controlled by smart contracts. Bounties work particularly well with trunk-based development, especially for fixing small bugs.

However, extending this to the other kinds of work required in a full DAO is tough, so we prioritised a native Status desktop app and moved most of the Open Bounty team onto the new endeavour. We felt that this was more important than bounties given our initial findings and - looking at the progress on our desktop app - we remain satisfied with this strategic decision.

It has meant, however, that Open Bounty has been in feature freeze for the last few months. In addition to this pause, we feel strongly - given how nascent the cryptocurrency community still is - that teams should not be duplicating work and re-inventing the wheel. The Gitcoin team, in particular, has been doing an amazing job with bounties. It is, after all, their primary focus.

Embark into The Ether

By working together with Gitcoin, we feel we can encourage more people to experience for themselves the benefits and autonomy of open source work, whatever their profession. To mark the occasion, we are launching the next 60 bounties we need solved through Gitcoin. Most of our bounties will be for Embark, which is written in Javascript and Nodejs. This fits in well with the active JS community Gitcoin has already built.

We’re also all about those extra incentives, so if all 60 bounties are completed during the month of September, we will issue an SNT bonus on every completed bounty. If all 60 bounties are not completed, no bonus will be issued. In the spirit of open source collaboration, invite your friends, co-workers, sisters, brothers, aunties, uncles and whomever you think can complete some bounties and get to work with them on a #buidling a better, more participatory, web!

We will release 15 bounties per week for the first three weeks and the final 10 bounties in the last week of September.

Embark has been designed to be fully modular and extensible, so is able to support features that no other framework can - like plugging directly into other parts of the Ethereum stack like Whisper and Swarm, as well as supporting multiple smart contract languages like Vyper and Bamboo. All of this occurs through Embark plugins - simple javascript files that can extend vastly the capabilities of the core engine.

We can’t wait to watch the open source community get stuck in and make Embark even more extendable, powerful, and easy-to-use than it already is.

The future of Ethereum depends deeply on our ability to collaborate. Success, for any decentralized network, will be defined not only by technology, but also by people and the communities of practice we can form. Lasting change depends on our ability to use new technologies in beneficial, equitable, and humane ways. We feel that the Gitcoin team understands this as well as we do, and we are excited for this next experiment in collaboration and crypto-community beyond the boundaries of traditional companies.

There's a #gitcoin chat now open in Status, so join us in there (by opening this link with Status) to discuss all the excitement. This is also the first step towards crafting conversational and social spaces that work together with the products, services, or content they are linked to, as a fundamental part of the architecture of web3 itself.

The first set of bounties will be available on Gitcoin's Issue Explorer on Monday, 3rd September.