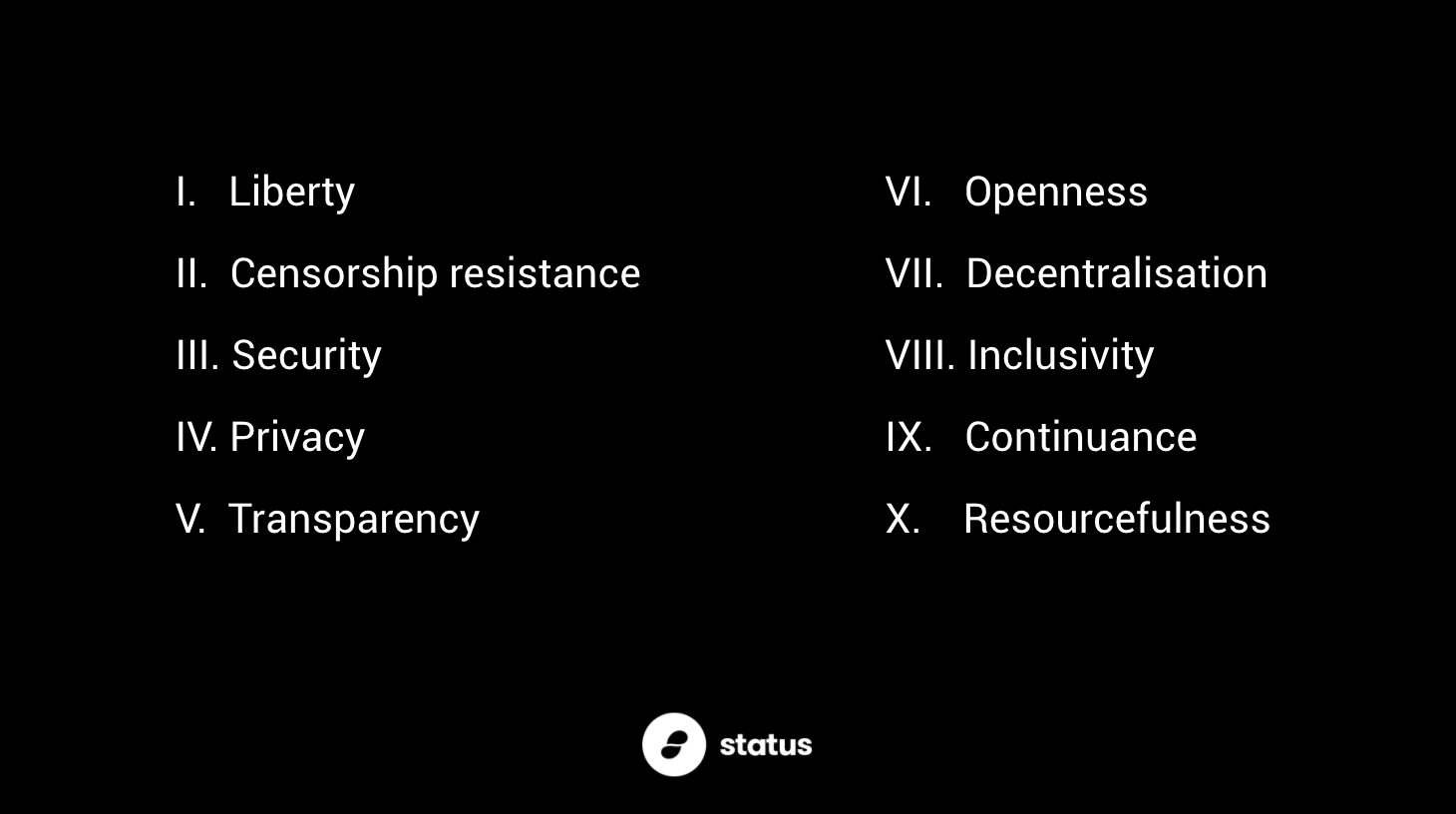 Status strives to be a secure communication tool that upholds human rights. We enable community money, community law and through privacy, preserve culture.

Our principles act as tools. Tools for thinking, for communication, and for decentralized decision making. They keep us honest about where we are failing short of our vision.

We hosted a quick webinar as a refresher of the Principles, why they are important and how they manifest themselves in the products, tools, and infrastructure we build.

For in depth analysis of each principle, check out the Principles Seminars hosted in fall 2018.

Presentation slides available for use here

We believe in the sovereignty of individuals. As a platform that stands for the cause of personal liberty, we aim to maximize social, political, and economic freedoms. This includes being coercion-resistant.

At a practical level, this means providing people with the right tools for their culture and experience to enable liberty and sovereignty. People come from various backgrounds and technical understanding. So we want to make tools that are accessible and usable by anyone.

This concept of Liberty is will put by John Stuart Mill in his book "On Liberty” which is about the self sovereignty of individual. The thesis is based around the individual vs some sort of authority. He argues that people should have autonomy over their lives as long as they do not harm other people.
--
Social Liberty Social Liberty - the state of being free within society from oppressive restrictions imposed by authority on one's way of life, behaviour

When we talk about Social Liberty, it means providing the tools an infrastructure to allow people to socially coordinate and fight for their own personal liberties.  A good example of this is the Suffragette movement in the US and Britain in the 19th and 20th centuries in which women were coordinate and fighting for the right to vote.

Or the civil rights movement in the US led by people like Dr Martin Luther King Jr, the decades-long struggle by African Americans to end legalized racial discrimination, disenfranchisement and racial segregation.
These are clear cases in which people and groups of people, are discriminated against and their social liberties are being marginalized. We build the tools to support these kinds people and these kinds of movements, both in coordination and the longevity of the cause.

In Hong Kong, people are fighting for their political freedoms from mainland china. Hong Kong has been going under a transition period in which it was under British rule but handed over to China. The Umbrella protests which started in 2014 are driven by the desire for democracy and fueled by an opposition to bill that would have allowed suspects to be sent from the city to mainland China to face trial. During these protests, the people were required to coordinate and communicate with privacy preserving tools out of fear.

Hong Kong is a clear case in which people may have economic liberty but lack political freedom.

Throughout the vote, some residents of catalonia were blocked from voting by the spanish government by blocking voting stations, intercepting ballots, arresting top catalonian officials, and even violence.

Economic LibertyEconomic - the fundamental right of every human to control his or her own labor and property.

Venezuela - highest inflation rate in the world. Making access to basic human needs a challenge. The GDP has fallen more than 35% over last 4 years which has been clouded by political oppression and corruption. An economy that became reliant on oil prices crippled the country when oil prices plummeted in 2014 - leaving much of the country in poverty.

Status aims to build tools to provide not only stability in places like Venezuela with volatile economies, but also to provide individual autonomy in regions marred by political and economic corruption.

Favelas in Brazil provide a different type of example. These communities built without any government authority or planning, typically have a reputation for violence. However, impromptu resourcefulness allows the favelas to operate cities within a city and are actually home to tons of creativity and diverse ideas. They could simply use with some of the tools to operate more seamlessly and promote a thriving economy.

With a bit of structure and transparent infrastructure, these communities can truly thrive and become sovereign autonomous economies.

Why - too often today, we see blatant censorship of ideas and information from centralized third parties such as corporations, platforms, and governments. It has seen by governments around the world during the outbreak of COVID-19 (even in places like US that takes pride in freedom of speech and of the press). Platforms such as facebook and other large social networks censor the type of information that can be shared (sometimes with the right intentions but how far to is too far).

How - Status leverages p2p protocols and removes the ability to censor communication as much as possible. Public channels serve as aggregators of news from multiple sources and People can trust that the content in these channels is not being censored by an authoritarian third party

How - we leverage technologies such as e2ee to protect your messages and others to secure private keys and transactions. Status wallet is non-custodial to minimize the attack surface on your funds. We audit all of our contracts, run bounty programs, and implement detailed threat modeling to make strong security guarantees.

Why - Privacy is important no matter who you are. By giving into surveillance and accepting the fact that your information and data is readily available and usable for both governments and corporations, you are not only sacrificing your personal liberties but also compromising culture at large. Privacy is not only for those who are hiding something. It is not only for whisteblowers and activists. It is a basic human right and one we need to safeguard.

Why - As mentioned previously, we want to build real tools for real people to use.

Why - As mentioned previously, we want to build real tools for real people to use.

Why - by removing Status as the sole stewards of the tools we build, the network can exist without the need for core contributors. We are building tools and infrastructure as a public good designed to last, change, and be altered. We currently are heavily reliant on Status core contributors and funding. This is an area we need significal improvement both in educating people on how to continue Status as well as incentivize people to continue Status both at a philosophical and financial perspective.

How - Open source, education, decentralized governance and use of tools like Assemble. Distribution of fund management. We need an incentive to carry on the network. Varying clients running the underlying protocol. 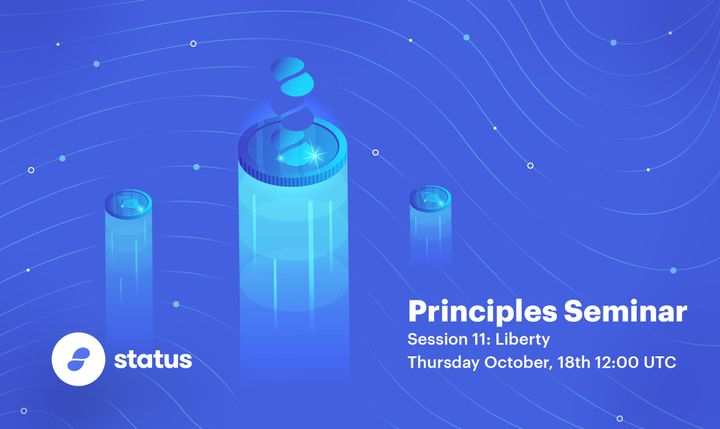 In the eleventh session of this 12 part series, join status' core contributors as we discuss and debate to which degree we uphold our principles, how we can improve our performance, and what we're adding to our Wall of Shame.

A bug in Testfairy that affects only mobile nightly releases has been discovered that puts the security of user’s private keys at risk. If users have real funds in a nightly release, we strongly recommend sending them to a new account on the stable version of Status.

In the tenth session of this 12 part series, join status' core contributors as we discuss and debate to which degree we uphold our principles, how we can improve our performance, and what we're adding to our Wall of Shame.