Discover All The DApps 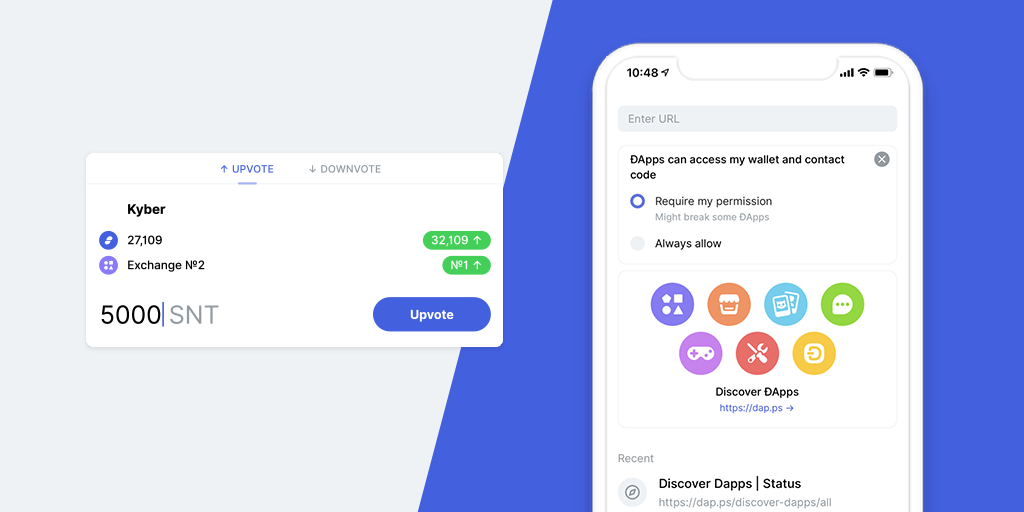 With so many personalities from across the globe trying to figure out the future of decentralised networks, it can be difficult to see the wood for the trees. To counter that, we'd like to showcase a simple but elegant part of the Status Network so that you can see and use all of the amazing work that happens on Ethereum every single day.

Discover is an easy-to-use way to access all the most useful DApps that have already been built in just four short, ethereal years, and now it's time to turn it into a fully functional DApp itself. We'll be giving away SNT to developers and #buidlers who want to play a new kind of ranking game, so read on to participate.

There are plenty of other sites which already curate DApps, from StateOfTheDApps, to EveryDApp, and many more. Plus, you’ve always been able to access any DApp you like through Status, just by browsing to it.

In contrast, Discover focuses on the most useful and usable DApps.

Truthfully, there are fewer DApps that meet these two simple criteria than the 2600+ you’ll find listed on StateOfTheDApps. However, the ones that do are genuinely interesting, and we owe it to the people passionate about building to make accessing and using them as easy as possible.

You will only find DApps that work with the latest web3 standards (like EIP1102), and that are mobile-friendly in Discover. Every DApp displayed there allows you to do something interesting; whether that’s collecting rare art, exchanging any kind of token, playing games, opening prediction markets, voting in Aragon or Status, buying DAI (which you can then send directly in any Status chat), lending and borrowing, managing your CDPs, publishing content on Cent and so on.

Discover is meant for people who want to use Ethereum now, not speculate on its future value. It is a sign of thanks to YOU, all the awesome people using web3; as much as it is a portent of what’s to come as the Status Network builds out a diverse and ownerless token economy.

Both Status and Discover are obsessed with making Ethereum work on resource-restricted devices so that anyone, anywhere with a mobile phone and internet connection can make the most of what decentralized networks have to offer. We believe that providing permissionless access to knowledge and services, while preserving people’s privacy, is the best way to build more equitable culture and societies.

As a user, the ranking system acts as a powerful filter for discovering the most useful DApps that exist. Though we plan on implementing many filter mechanisms, having one economic symbol that can only be interpreted very narrowly (whoever stakes the most, ranks highest) means we can provide a level of transparency to you that is significantly less easy to manipulate, without needing to resort to outright censorship like most major web services today.

As a developer, this acts as a similar system to AdWords for getting your product/service in front of users, except you stand to earn back a lot of your initial spend because you're not paying a company, just locking tokens in an autonomous contract that is not owned by anyone; and you know exactly how your content will rank, rather than relying on opaque and proprietary algorithms. Anyone can submit a DApp: no permission required (though we do review what gets displayed in our UI).

People can access Discover from anywhere - you do not need Status, or any web3 browser at all. You need not install anything to benefit from its functionality. Browsing to Discover through Status only enriches the experience, as you can go directly to your chosen DApp and already have everything you need - keys, coins, identity etc. - available so that you can just get on with doing whatever you need to do.

The point of cryptoeconomic design is not to create more "fair" systems. It is to create systems with no single point of failure.

This is a vital distinction many miss. "Fairness" is a great success metric because there are so many divergent ways to measure it. However, for precisely the same reason, it is a terrible design goal. Having a clear and easily-measurable goal in mind is the holy grail of any mathematician, physicist, or computer scientist. Once you can understand and articulate clearly what you want to achieve, implementation becomes "fairly" trivial.

This has always been true: Euclid's Elements, the beginning of geometry, was written in the attempt to prove that there can only ever be five Platonic solids. Euclid was not trying to "explore geometric design space", or however a pseudo-intellectual Ancient Greek might have put it. He had a clear goal in mind and built towards it, charting the territory as he went not to show how clever he was, but simply as a side-effect of moving closer to his final proof of the five possible Platonic solids.

Our goal is clear:

Design an economic system for curating information with no single point of failure and no owner, where information which ranks highly is provably valuable to network stakeholders, while protecting against the rich.

This can actually be achieved very simply: the more SNT you stake, the higher you rank, however, the cheaper it is for the community to downvote you. It’s the most free market we could design that still protects against the rich, and does not require any kind of identity or permission in order to work effectively.

Everyone agrees: those who rank highest must be providing the “most value to the community”, but how exactly to measure that value is a contentious question. In this setup, we have made “value” quite literal, as SNT staked on DApps is locked out of circulation, so paying to rank acts as a donation to the whole community. Everyone who holds SNT literally benefits from those willing to stake more to rank highly.

We believe this curve represents a step forward in the research and implementation of decentralised curation mechanisms. Another (interactive!) blog post detailing more exact mechanics is here.

After some final checks and tests, we'll try and launch this week as the only mobile-optimised and easy-to-use DApp for curating DApps in the world. It's an exciting time, and we'll be giving away 1000 SNT to the first 50 DApps interested in playing this ranking game with us.

Watch this blog for more, and stand a chance to be one of the first fairly ranked distributed applications in history. 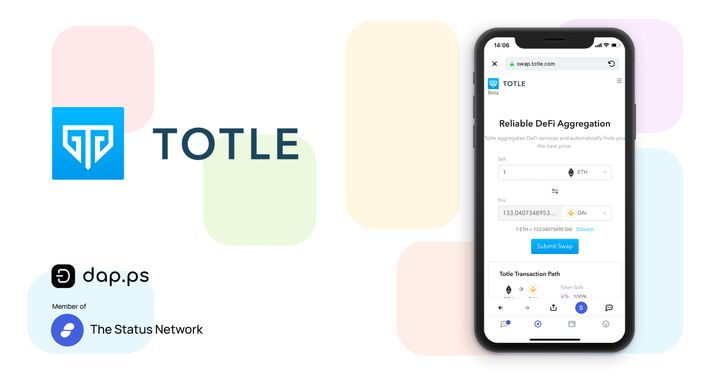 Start swapping some tokens on mobile with Totle and see how simple and intuitive it is through the Status mobile app. Chat, browse dapps, transact, and swap all from your phone through the secure Status app. 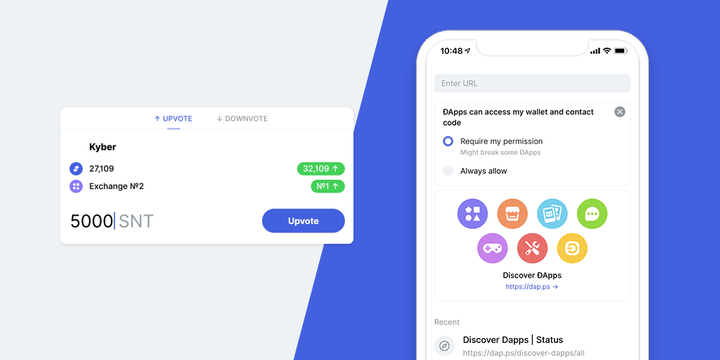 Dap.ps [https://dap.ps/] is an easy-to-use way to access all the most useful DApps that have been built for Ethereum. It a decentralized 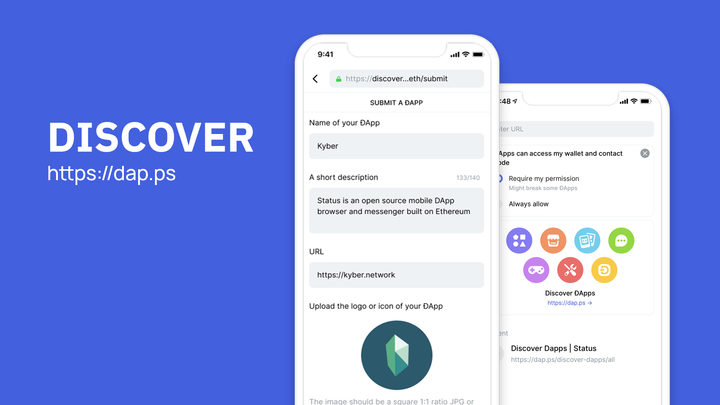 Introducing the latest version of Discover. Submit your DApp, stake SNT to rank your DApp, and even earn 1000 SNT.