The Grand Design, Such As It Is 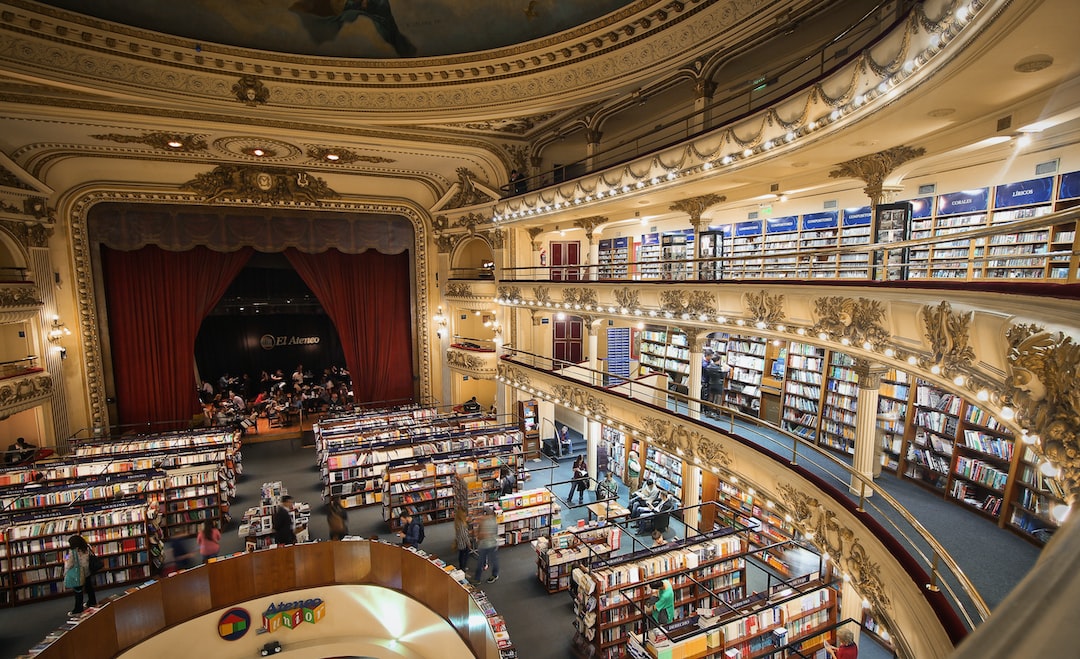 I wrote about paradigms and cryptocurrency not so long ago, and left a little teaser at the end about how the African concept of ubuntu was an interesting lense through which to consider language, imagined as the first logically decentralised network humans invented. My intention was to let it stew for some time, but a letter from Jarrad has me thinking in overdrive.

This is not a response though, and you won't learn about our plans here: it is just one step further up the linguistic rabbit hole opened by decentralized networks running open source code.

It's All Just Representation

We can start by asserting that the meaning of words, much like the order of transactions, is arrived at consensually using a mechanism no single individual or group owns and that it is precisely this feature which gives any medium communicative value and power. There is a tension in this though, isn't there? Where do the words we all agree to mean certain things come from? Who gets to make the transactions and validate them?

Well, people likes Jacques Derrida have lots to say about signatures, events and context which is worth reading, but the simplest answer is that meaningful words are generated by creative individuals acting autonomously within a wider community of contributors. This is why ubuntu is so important to any holistic understanding of language.

"A human being is only a human being through other human beings" implies - simultaneously - both the possibility of individuation, of human-being, and the impossibility of achieving that without also acknowledging that one's individuality rests upon relationship with others. We have autonomy in terms of how we interact with the world, but actually being autonomous in the world requires a community to agree upon what different ways of interacting with the world really mean.

I chose nonfiction precisely because it captures this paradoxical aspect of language most acutely. It also differs from autobiography in that it is not just a narrative about the self and the truth of that particular self's experience at a given point in time. Nonfiction purports to be about a wider, shared, historically verifiable truth. Yes, it is told from the individual's perspective, but something about the way it is told reveals the universal in the particular; aims to show off what is shared, rather than what is unique, about experience.

It is these structural features of nonfiction which led me to draw a map that charts a path out of the frame of representation implied by the use of any language (it's really a geometric representation of my thesis, but try telling that to a professor of English Literature). It's also these structural features which make nonfiction a literary equivalent of cryptocurrencies, in that both are premised upon shared, historically verifiable 'truths'.

The frame of representation is very important, but tough to get across simply. The key idea it represents is that language is always only a representation of a representation of the thing itself. We are always, at best, two steps removed from what we talk about. This abstraction is the root of both language's greatest power and ultimate failure. 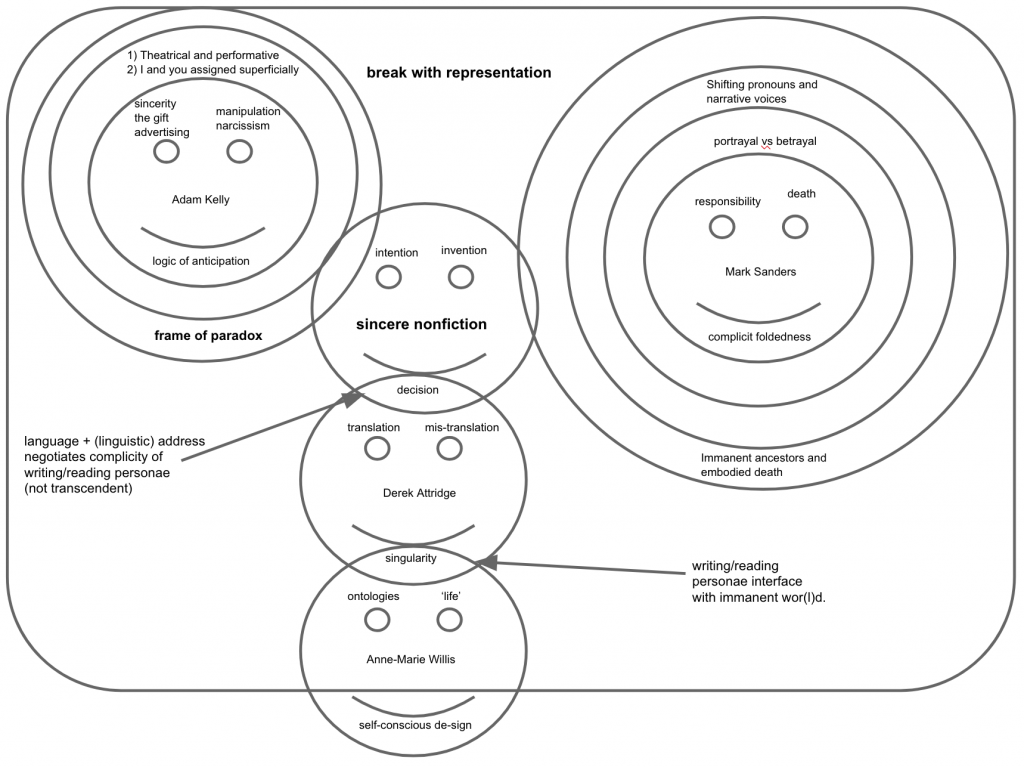 So, here's the way out of the frame of representation: it is achieved by confronting polarities like sincerity and the possibility of manipulation it always implies, or the gap between intention and invention and realising these can be overcome with reference to some transcendent function (depicted as smiles). Such functions work via the logic of anticipation, or a recognition (literally, in the way you speak, write, and read) of our complicit foldedness in human being.

I don't expect you to follow all of it - that single slide takes about 30 minutes to present - but the key here is that the last circle breaks out of the frame of representation. This can occur when we engage in what I ended up calling self-conscious de-sign as a means of moving between ontologies - i.e. ways of knowing the world - and life itself.

Self-conscious de-sign is a term which captures both the self-referential nature of responsible language, and the fact that we design our spaces (textual, physical, virtual) but that they in turn design us back. We are designed by that which we design in this never-ending dialogue between individuals and the worlds in which they participate.

Used responsibly, this dialogue can actually de-sign the author, thereby letting a narrative take on the aspect of a shared, historical truth (rather than merely autobiographical) which I said was such a defining feature of the nonfiction genre; of art that is "reality hungry".

So, why tell you all of this? Well, if written and read according to the map above, such a text would likely constitute what we might call a language-event. I don't want to get too deep into linguistic technicalities here, but a language-event bears all the hallmarks of what others might call a singularity. It is some relatable event, some describable occurrence, after which nothing can be the same because our linguistic methods for relating to and describing consciousness itself have changed.

The invention of writing - most likely in the 4th millennium B.C. in Sumer - was what we might call a language-event. Writing gave us the ability to externalise consciousness, and therefore manipulate it in previously unimaginable ways - "books are proof that humanity is capable of magic" according to no less than Carl Sagan, after all.

I was having a conversation with a Sufi scholar on Sunday, and he made the point that the Qur'an was also a language-event. That the book itself says it has come to a people unworthy of it, but that they were chosen for their language (Arabic) and its unique ability to express the vastness of thought contained by what - to many Muslims - is a sentient being in and of itself. Basmala, old friend.

It is my contention that the deployment of Bitcoin in 2009 was also a language-event. Note that I am not trying to give it an overtly religious connotation: the command Iqra! (Read!) given to Mohammed (peace be upon him), which then precipitates the writing of the whole Qur'an, is something substantively different from the development of writing itself. And the deployment of Bitcoin is, again, something substantively different from the encoding of a religious text.

However, they all have this one, very unique property: they modify collective human consciousness by changing the mediums through which communicated value and power flow.

It's a really profound thought, when you sit with it for a little while.

Jarrad asked, "what if we could build rules directly into the human-to-human communication protocol we use to talk to one another?" Well, we're all doing that already. It's what gets me so excited about Ethereum, and was the basis for my presentation in Bangkok. It's all about the perfect language, people.

But there's still more, so gird yourself. Jarrad - and many others - have some fantastic ideas about what this language looks like at the protocol layer - i.e. the sort of linguistic primitives we might need to make this possible computationally, to engineer a new system that will suit our needs.

However, language is as much a social phenomenon as it is an engineering problem - and I offer the map above as an attempt to try and show what is possible for human beings able to access a network whose primary purpose is generating agreement about the order of events so that we can derive meaning and therefore value from the protocols we share.

The fact that decentralised networks mimic so exactly language itself literally allows us to double back and self-consciously de-sign ourselves and yet nevertheless participate deeply in coding the sorts of incentive structures we all might find more attractive; the next generation of scalable coordination games that humanity will play.

"By turning ourselves into a DAO, we signal that what we're doing is bigger than any one of us; that this software is a public collective good. By building that software to the best of our abilities, we can show that communicating privately, securely and transacting on a public programmable blockchain is a new human right, a human right that offers stronger guarantees for liberty itself."

You can imagine that a hyperlink on the web has become the sort of linguistic primitive I mean. It has entered socially-acceptable and meaningful conversation in the sense that now, you often just send a link to a friend as a means of explaining some specific point, rather than a long string of your own construction.

In much the same way, it should become possible to do this with smart contracts, automated human agreements, transactions and engagement.

Really, the vision extends much further, though. Jarrad puts it thus:

What's becoming pretty clear to me though is you want webassembly integrated with a microkernel. You give it 12 words, and an ENS name, and it pulls down and caches that operating system. Which is all webassembly modules, for everything: drivers, application delivery, all of it. Throughout the wasm modules, the software is 'hyperlinked' and visible. The web reaches down and up, beyond the boundaries of the browser. The browser and operating system merge, but only the best of their concepts. The web permeates every part of the stack.

You can find some of the historical research some friends and I have been doing on similar ideas here.

You see, building a network that incentivises self-conscious de-sign means that the linguistic primitives we use can take on the quality of self-fulfilling prophecies. This is no claim for a false sort of transcendence, for words are always-already determined by the world within which they prophesy. Being aware of this double-bind, though, is precisely what allows for the complicit negotiation of intent in any singular work of 'art', which is to say, work of 'life'.

Complicit negotiation, what has been called the foldedness of human-being, seems to be the root of love in all its many guises. "His love is of course selfish: it is his progeny, and no one else, for whom he wakes up in the mornings. But what fiery and desperate love" (343) it is: the defeated love that could lead a few complicit human-beings back home, the appropriated love of a forged and fragrant song, the selfish love for those yet to come and those already-gone, the crying love that is lost when we wake from our dreams and can no longer see "the grand design, such as it is" (13).

P.S. If you're looking for a good description of the intersection between natural language and computation, which I have so glibly glossed over here, this is a good place to start.

P.P.S. One of Mohammed's (peace be upon him) names in Arabic translates as "the unlettered one". It is significant that an illiterate man is responsible for the Qur'an, and it is even more significant that the first word in that book is the commandment Read!. The semantics of the Qur'an, in some readings, can be seen as generated from The Prophet's ability to read and then recite the divine words written on the tablet of his own heart. Ibn ‘Arabî is likely best to study this further.