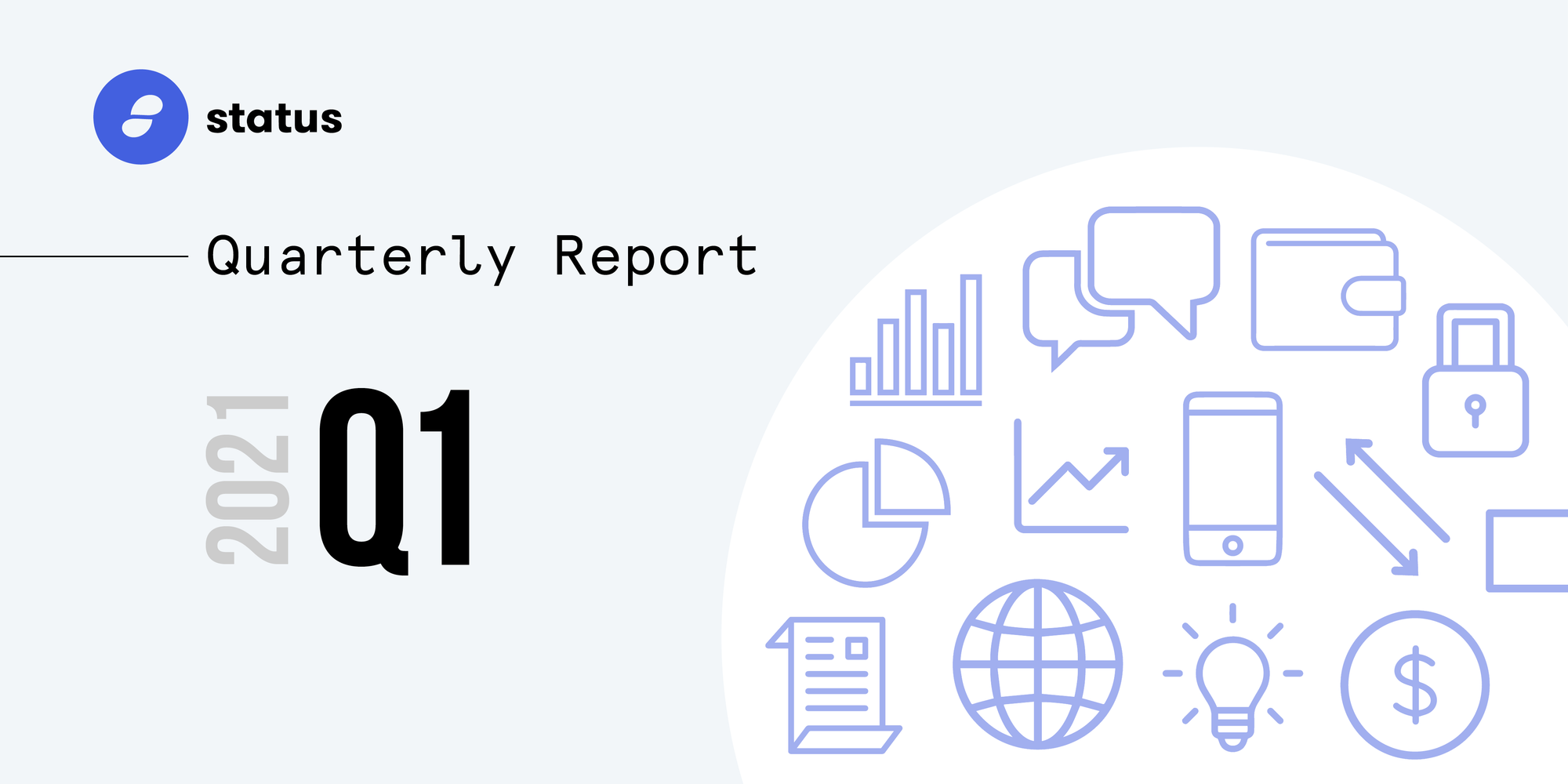 We’re back with the first Status Network Quarterly Report of 2021 and excited for what the year has in store. This report took a little longer to pull together than usual, but only because there is so much work happening across the entire ecosystem of projects including Status Mobile and Desktop apps, Nimbus, Waku, Keycard, and some exciting new projects kicked off.

As always, the core and community contributors have been focusing on secure communication tools that live up to the Status Principles.

While DeFi and NFT’s made headlines this quarter, a new trend is emerging in crypto social – and one that Status has been building towards since its inception in 2017.

Q1 saw some significant improvements to the overall mobile experience with some expected features that bring the app even closer to feature parity with mainstream Web2 communication tools. In Q1 there were also major updates that bring Keycard and the world of Web3 seamlessly into your pocket.

The core team also began work on some significant improvements to the way communities can organize, connect, and communicate with each other. The team was deep in user research, design iterations, and spacing out architecture requirements for some new community based features to be rolled out later in the year.

Q1 marked a significant milestone in the growth and retention of the Status Mobile app with over 830k App installs across the Google Play and App Store.

759,912 New Google Play users were acquired during the time period and there were 492,172  active installs on Android across 190 markets and over 120 languages. On average there were 13,164 Daily Active Users.

The product is still in beta but includes core functionality such as:

The Desktop App still hides the wallet and browser tabs by default while still in beta. But with the progress being made by the team, the goal is to conduct an audit and move out of beta in the coming months.

The latest Desktop beta can be downloaded for Mac, Windows, and Linux here.

Many SNT utilities are designed as micro-transactions within the application and network itself. However, with gas prices hitting crazy levels, these transactions became less realistic considering the expensive network fees.

This led the team to further analyze and investigate Layer 2 solutions that are suitable for Status.

Checking in on our SNT utilities live and in development, we have:

Keycard is a secure, contactless hardware wallet, which, when integrated with Status, enables users to:

As mentioned above, Q1 was a momentous quarter for Keycard. The team added the ability to add an existing account to a Keycard. Previously, owners of a Keycard had to generate a new account in Status and choose `Keycard` as the storage option for your keys.

In March, Keycard was finally integrated with iOS.The iOS integration includes all the same benefits as Android and can be used with iPhone 8 and above.

Learn more about Keycard and get your own at keycard.tech.

Active work on the Embark Framework has been on pause, as the Embark team has been focused on building the Status Desktop app, as well as integrating Embark with Status, so no updates to report for this edition.

With the mainnet launch of the Nimbus client in Q4, the team continued progress on the client and looked to offer a better experience for validators

Of particular note, it looks like Nimbus is becoming the client of choice among Rocket Pool users. This is a huge philosophical win for us, since we believe that trustless staking pools, like Rocket Pool, are absolutely key to ensuring Ethereum's future as an unbreakable and censorship-resistant system.

Stimbus is a project that implements the current backend library status-go in the NIM language, with the goal of bringing closer integration with the Nimbus and Vac projects and bringing Waku v2 into the mobile and desktop app.

The team implemented several status-go APIs and functionality, some examples include Status Accounts, Contacts, Mailserver, Usernames, Identicons, Chat and Messages (and related features), Contact Management, Wallet accounts, tokens, transactions, dapp permissions, web3 provider, and other functionality needed such as nim-sqlcipher, protobuffers. Also work done on NIM's concurrency model, as well as the NIX integration to be able to integrate with status-go and status-react.

The approach of the project was adjusted to speed up integration of waku v2 – an implementation has been done in go (go-waku). The next steps are to create a bridge and do some initial testing with branches of desktop and mobile using this status-go branch. Nim-status now continues as a replacement for geth but this time as a pure nim implementation without trying to be a hybrid with status-go. It will reuse most of the code done previously that implements a lot of the required functionality. To speed up development the library will be developed with a very simple command line client, and later integrated into desktop/mobile.

Vac, the team behind the underlying messaging protocol in use by Status, has been heads down working on Waku v2. Waku v2 is a general-purpose private p2p messaging protocol that seeks to address some of the limitations of Waku, such as scalability. A summary of its motivations and goals can be found here.

During Q1 the team grew in size by adding Franck Royer to build out js-waku, a JavaScript implementation of the Waku v2 protocol.

The team also continued to make developments on Waku v2 and how spam protection can be achieved in Waku Relay protocol1 through Rate-Limiting Nullifiers.

Here is a list of some key Waku Updates:

Lastly, collaboration with the WalletConnect team began with the fine tuning of infrastructure support for Waku v2.

Q1 was a busy time for the Status team as they prepare for large scale acquisition efforts with the release of some exciting new features. So the team was heads down strategizing new product launches while at the same time engaging with the growing community.

To mark the all time high of 6.9k active peers in the network, Status held the #statusstrong sweepstake in which community members were asked to join the #statusstrong Status public channel, react to a post, and enter to win 50 DAI. The community came out and showed how active they can be.

Security Lead Corey Petty was a driving force in the security community as he outlined what it takes to run a successful security audit. The outline is a cornerstone of the Kernel incubator Security track which is now a permanent fixture of the program. Through our involvement with initiatives like Kernel, Status continues to plays a key part in enabling and supporting the growth of the web3 ecosystem and welcoming newcomers into the community.

In an effort to further articulate strong privacy guarantees of Status, the team produced the article “Private Messengers: what can they really see?”. The article was one of the best performing across social media.

The community continued to grow with followers across all platforms growing. Our Twitter account alone had over 11k new followers during the quarter.

The narrative for “crypto social” continued to grow across social media and Status took the opportunity to highlight some of the privacy downfalls of major web2 social media platforms. The team started off by highlighting the popular app Clubhouse with this in-depth privacy analysis.

For ease of reference, we report our financial data in USD. Cryptocurrency amounts are translated to the rate of the day when the transaction is recognised.

To ensure the long term sustainability of Status’ projects, we’ve secured enough fiat funds to ensure a runway for operations of 3+ years.

The assets position in Treasury is as follows:

Given our assets position, the runway is as follows:

For Q1 2021, we were out in force at ETHDenver with four different panels across community, security and identity. Juan David, our Colombia Lead, Simona Pop, Head of Community, Corey Petty and Jarrad Hope each spoke about Status and our work across different key verticals. All videos available here:

Evolution of Community
Global Adoption: Where are we now?
Identity LegosThe Thing with Privacy is…

We also ran over 10 in person and virtual meetups across LATAM, onboarding newcomers onto Status and into the broader ecosystem. Partnerships with AAVE and Pooltogether were established to illustrate the simple access to DeFi via the dApps browser. Our Crypto Atelier meetups are also proving popular as we introduce LATAM artists to the NFT space via Status. Partnering with POAP and various artists in the space, we have been rewarding meetup participation with bespoke NFTs and will continue building on a reward system and potential ambassador recruitment dynamic.

Spring started with a total count of 76 contributors to the project, amongst which some who we hadn’t seen in a while: happy returns to Stefania Chiorboli and Ned Karlovich, and to Pepper Lea after giving birth to her lovely baby! You’ve been missed!

In addition to the returning contributors mentioned above, we’ve been lucky to bring onboard in this first quarter:

We also see a valuable team member leave - at least for now - with Dean Eigenmann. We miss his talent and wish him all the best for the future!

We’re planning to support more projects and users, and we’re looking for a number of amazing people that would make excellent additions to our bunch - if you know any, send them our way! Pepper, Stef, and starting shortly Angel and Sabin will be able to point you to the right information about submitting their details and getting appropriately rewarded.

Most importantly, we’re looking for people that can bring in technical leadership and experience with Golang together with embedded systems programming, p2p technologies, designing high-performing distributed systems, and modern cryptography.

In Q1 2021, we received 58 new ambassadors applications. The current number of Status ambassadors is now at 55, with representation across 32 countries.

Status ambassadors completed 104 tasks from January to March, broken down by category into: events (3), content (61), community building (3), and technical (37).

Some highlights from the program in Q1 2021:

Our ambassadors and open source contributors helped spread the words of Status by translating Status into their languages. If you want to learn more about the translation campaign, visit translate.status.im.

8. Kicking off the year well

2021 is off to a great start for both Status and the crypto industry alike. With the Status Network making great progress across all projects in the ecosystem and seeing some significant growth in the application, 2021 is becoming very important year we hoped it would be.

Nimbus is shaping up to be the most energy-efficient Eth2 client. Waku is steadily progressing into the communication layer for Web3. And Keycard is now available for Android and iOS users alike.

The team now has plans in place to provide the community with some major updates to the flagship product across mobile and Desktop. Strategies are in place, development is underway, and plans for growth and retention are of utmost importance.

Thank you for reading this report. We’re always excited to tell you about the work we do. Here’s hoping that wherever you might be, you’re safe and well. Take care!

- Your friends at Status

This report was made for your entertainment, and we’d ask you not to rely on it for any other purposes, e.g. making investment decisions. Just to be super transparent, we want to highlight that:

Thanks for your understanding!